ABC Cambridge is based in the historic university city of Cambridge – the ideal place to live and study!

Our programmes are flexible, so you can choose the course that suits you, whether that’s full-time, part-time, in a group, one-to–one…… taking an exam or just for fun.

​Our students study English for their work, to live in England, to go to University - even to travel - but they all have one thing in common: they’re serious about wanting to improve their language.

Our teachers are friendly and approachable, with a wide range of professional experience which enables them to provide specialist as well as general courses.  Most importantly, they love what they do and work very hard to help students achieve their personal goals.

ABC Cambridge is accredited by the British Council for the teaching of English in the UK.

ABC Cambridge’s mission is to respect equality, diversity and inclusion in helping people from the global community to learn English. We aim to provide a supportive and welcoming environment which enables all our students to develop their English-language skills to the full and to explore British life and values, as well as encouraging tolerance and cultural awareness among all staff, students and partners. Ensuring comfort, safety and wellbeing in our school community is at the heart of everything we do.
Our Guiding Values are integral parts of everyday life at ABC: 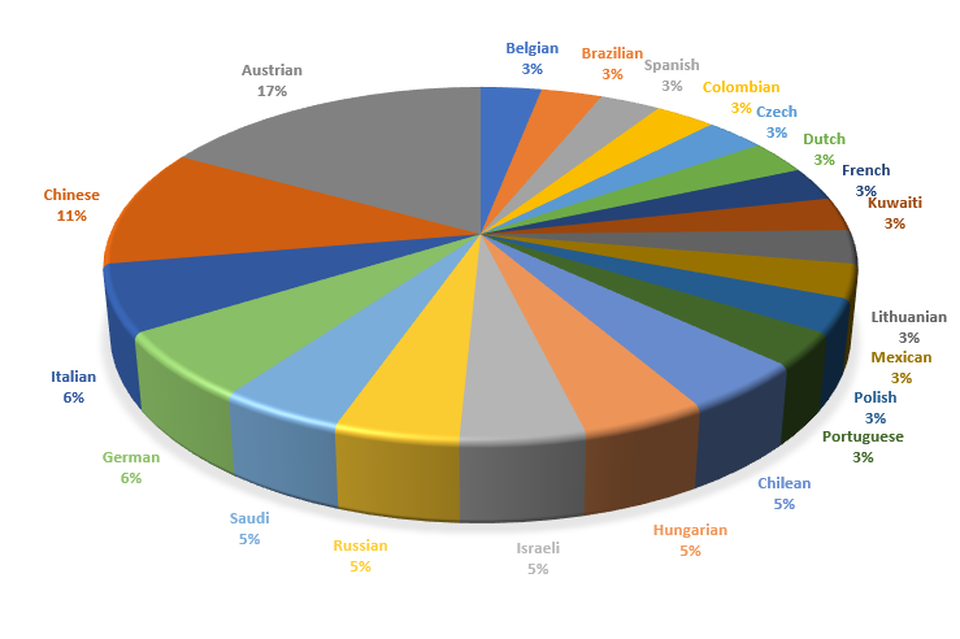 ​Information is based on student numbers 1st January - 31st December 2019. 2020 & 2021 data unavailable due to the impact of COVID-19. The Nationality Mix varies over different courses and levels.

The story of ABC Cambridge starts in the 1980s….
The school, then called Academy School of English, was set up by Lesley Whittaker in 1986, in response to the lack of provision for au pairs and others who could not take full-time courses.
This simple idea soon developed to include anyone and everyone who felt their needs could not be met by the traditional courses on offer, or who did not feel comfortable in schools with predominantly young students taking a few months in Cambridge to round off their education.
Academy School soon outgrew its modest beginnings in Lesley’s home, and moved to much larger premises in an attractive Georgian mews courtyard.
1990s – new decade, new name
The new premises offered scope to develop the business, which became a partnership. While continuing to offer general and exam courses, with special provision for part-timers, the school moved into the area of tailored courses for professionals. Our location in Cambridge gave us access to a pool of excellent tutors who were not only qualified to teach English, but who also had high-level real-life experience in professions such as law, accountancy and medicine.
It was felt that the name Academy School did not reflect the new direction of the business, and so Academic and Business Consultants was born, soon shortened to ABC.
Another major development in the early ‘90s was the Junior International Summer School, taking children from as young as five, coordinating their courses with the existing adult programme to enable families to study at the same time. This programme remains immensely popular to this day, attracting students from more than forty countries every year.
2000s – ABC Languages
A new partner, a French modern languages teacher, joined the business, and foreign language training was added to the portfolio. Initially targeting companies and individuals who needed more intensive or specialized training than evening classes could provide, teaching was soon extended to children, in the form of after-school and Saturday Kids’ Clubs. These focused on French, Spanish, Italian and German, while the adult training encompassed languages as diverse as Hebrew, Mandarin and Macedonian.
Alongside these developments, ABC Languages started working with groups of European high-school students, coming for short stays of one or two weeks. This was a major departure for the business, as there was now a need for a large amount of homestay accommodation and many more classrooms, as well as organising social activity programmes – all of which we’d previously managed to avoid! Fortunately, our good relations with City and University stood us in good stead and we were able to teach the courses in the beautiful University Colleges, and recruit excellent hosts from the local community.
In 2004 the decision was taken to seek accreditation, and we approached ABLS - once a government-approved body accrediting smaller, non-chain, language schools. This offered our students an assurance of quality, while maintaining our individuality.
As the decade progressed, the demand for English courses increased, which was fortunate, as the economic downturn meant that company training budgets were slashed and demand for foreign language courses declined dramatically. The decision was finally taken to end foreign language training in 2012.
Where we are now
The continued growth of the business meant that we badly needed more space. In 2016 we opened new premises in the historic centre of Cambridge. This has proved a great success, the staff and students particularly appreciating the very central location with its proximity to cafés, shops and transport, as well as the chance to study in the surrounds of a world-class university.
ABC Cambridge is now accredited by the British Council for the teaching of English in the UK.